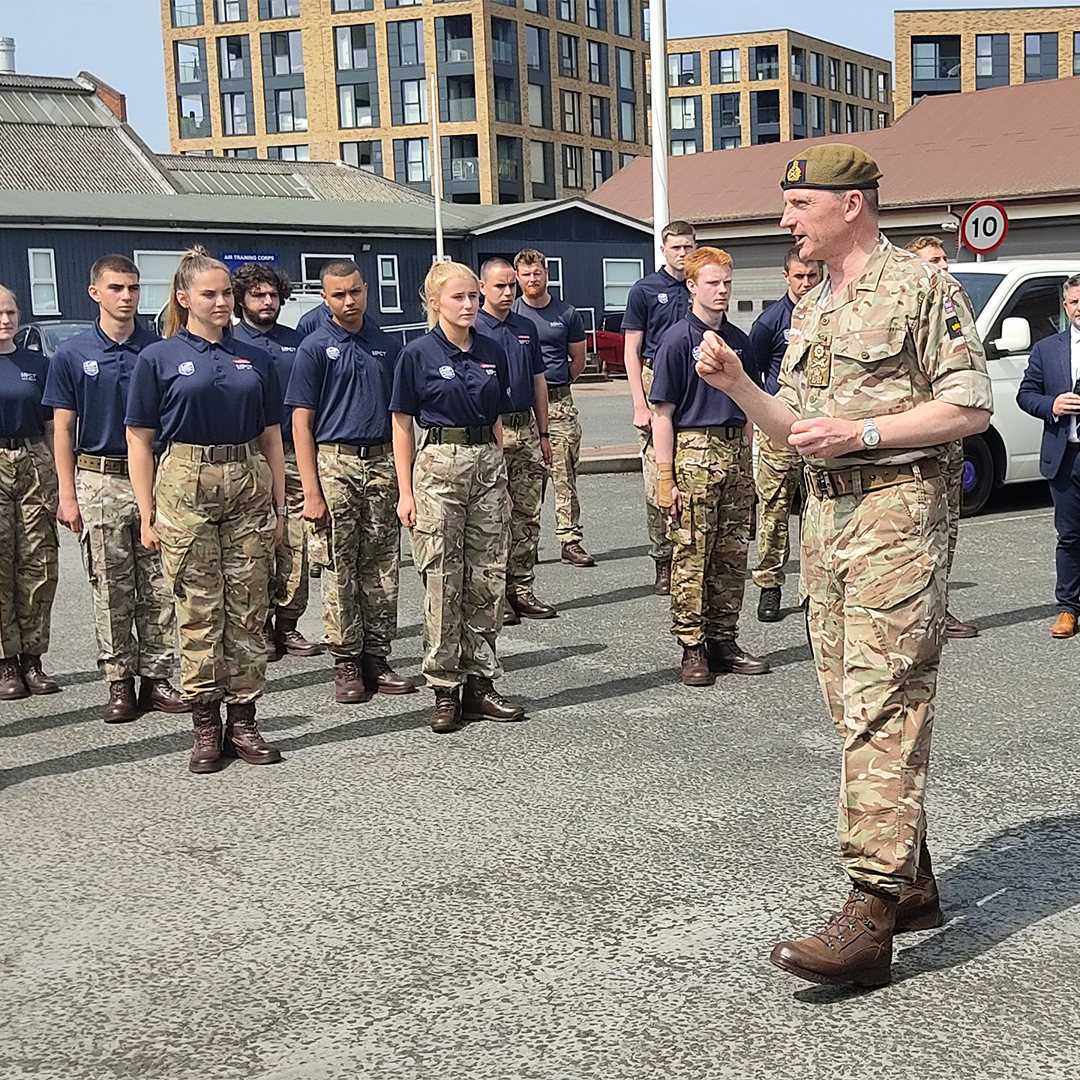 MPCT had the pleasure of hosting Major General Chris Ghika CBE on 15th June at a hot and sunny MPC Croydon. The visit had been agreed back in September so we had been looking forward to welcoming him for some time.

The visit of Major General Ghika was significant – not only is he the Major General Commanding of the Household Division, but he is also the General Officer Commanding of the London District hence why it was so important to bring all 3 London colleges together for the occasion. When asking the General if he had been busy on the weekend, a smile summed up his answer… he had only overseen the Trooping of the Colour military parade to mark the official birthday of HM the Queen on the Saturday, before hosting the President of the USA, Mr Joe Biden during an inspected a Guard of Honour at the beginning of meeting with HM the Queen – both events being held at Windsor Castle.

After welcoming the General, the first serial was an Ambassador Brief which was delivered by 2 of MPC Croydon’s Ambassadors – Miss Kember and Miss Rhodes, who did an outstanding job. Their brief was informative, creative and delivered perfectly – it really did set the scene for what was a fantastic visit.

The first of the 3 external displays was a PT Relay circuit as delivered by MPC Battersea, being led by Staff Terry Carmichael and Pete Stiles. The efforts put in by the learners was notable, where the General was particularly impressed with how a single PT session being delivered to a large group of learners, caters for all ability groups by applying the 3 colour bib system.

Next was an IMF display by MPC Edgware, which began with the learners running onto the parade square and immediately getting into position. Miss Chikavhu led an excellent display, where it quickly became clear why she had been chosen to take the lead – her ability to control the display with sharp words of command, notably transferred into how the learners reacted, and so well. It was brilliant, and well pulled together and rehearsed by Staff Chris Couling, Zohair Talab and Anja Von-Moltke.

MPC Croydon’s Drill display followed, where it’s worth noting that only a day prior during rehearsals, we had discussed that the blistering heat was hampering their performance. We agreed that it would need to go up a notch or 2 for the visit, and it did exactly that and way more! It was so good that the General said that “…I would take this standard of drill across the regular army every day of the week!”, which is some compliment from the General of the Household Division! Mr. Childs led the the display and was excellent, never faltering whilst keeping a cool head. Individually and collectively, it was precise and disciplined. Staff Jay French and Courtney Clark – your hard work and attention to detail paid off, and you’ve now set the standard!

The three colleges were then formed up in a hollow square for the final activities of the visit.

Four Leaners from MPC Battersea marched to the centre of the parade and individually presented their Ice Breakers to the General. The confidence which Mr. Allen, Mr. Butt, Mr. Williams and Miss Atkinson displayed was incredible – you’d think that they’d been speaking publicly for years. Their journey to where they are now and what they are aspiring towards was inspiring, whilst amplifying what MPCT is all about – making better citizens!

MPC Edgware concluded the displays with delivering the ‘If Poem’ – 1 learner at a time, with a line from the poem each, until every one of them was kneeling by the last line. What a way to finish. Fantastic.

The General was then invited to present awards for Best Turnout, Best Skills, Best PT and a ‘Players Player’ award, along with a number of MPCT PRIDE Coins, for each college. All were very well deserved.

The General’s final words could not have been more complimentary, as has his feedback since. The result of such a strong visit will have raised the profile of MPCT even more so, and will enable the already strong relationships between MPCT and the Armed Forces even further.

All staff and all learners involved were outstanding – you’ve done yourselves and everyone at MPCT proud.