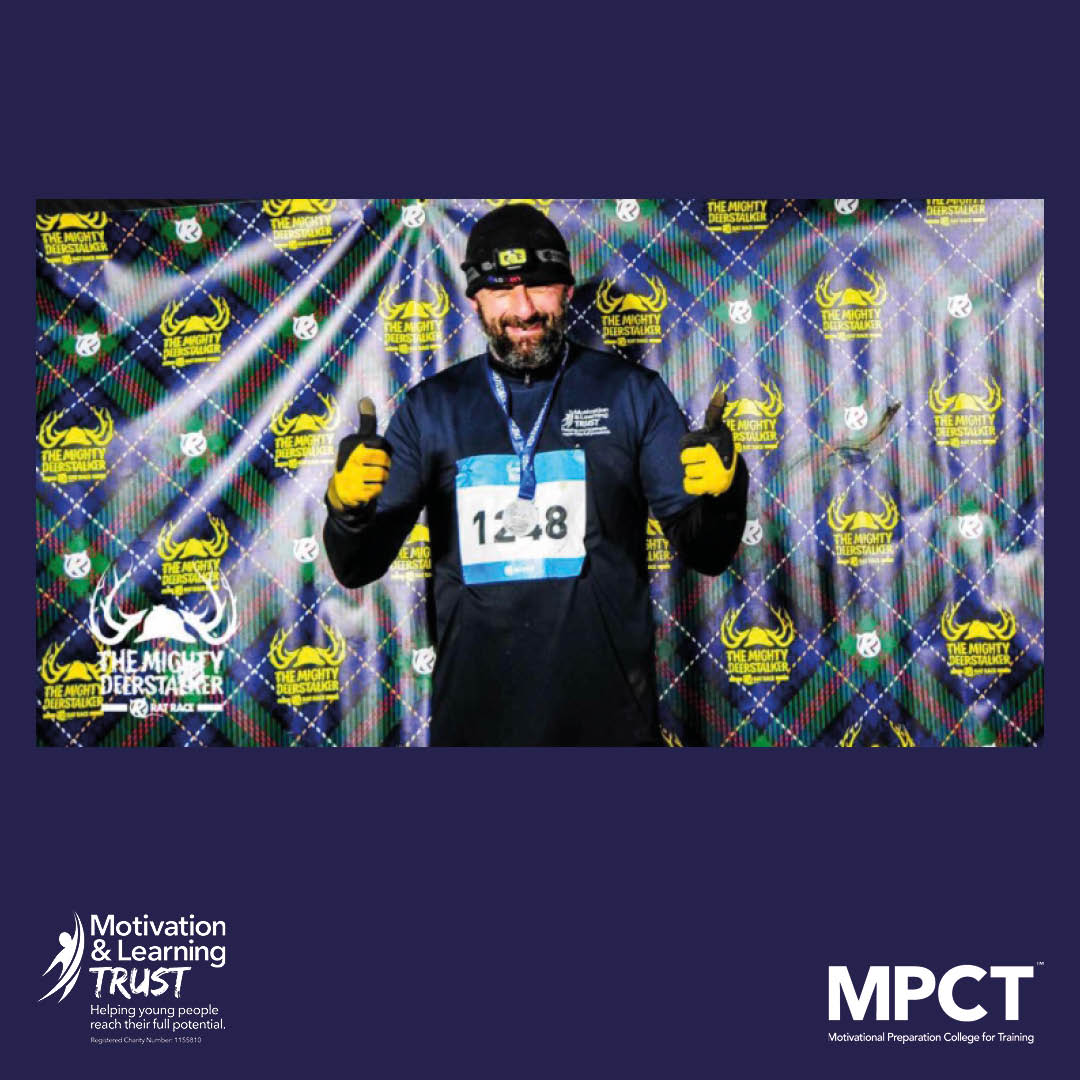 MPCT’s Wales and Midlands Regional Operations Manager has pledged to take on 15 endurance challenges in 2019 to raise funds for our charity, The Motivation & Learning Trust. Click HERE to see the whole list of challenges he has planned for 2019 and to donate to the MLT.

Saturday 16th of March saw him complete the first challenge, The Mighty Deerstalker. Please read below for what he had to say about this tough event:

The Mighty Deerstalker is an established race, it is considered to be the most challenging night time trail run in the UK and is the 1st race on my list to complete my challenge for the MLT this year.

The race takes place in the Scottish borders near the beautiful village of Innerleithen in a valley between 2 big hills.

The weather was challenging on the day and it looked like it was going to rain all the way through the night, but luckily this stopped just before I left with my wave of runners. After about 400 metres we came across an open field just as the light was starting to fade. The field was generally just one big bog that had the added challenge of eating runners shoes, anyone who had not tightened their shoes up prior to running were searching for them on hands and knees (and we had only just started), I was well prepared for this as I have lost far too many shoes in the past on this sort of ground so I was straight through and onto the first Obstacle. I hit a queue of runners who had stopped and as I moved forward I noticed we had hit the 1st river, this was not a problem, The river was only at hip height and I was straight through and competing again taking over runners who were not used to this type of ground.

Then began the first climb, the light had just about faded so I turned my head torch on and started climbing. I had prepared well for this; Moel Famau Hill Runs had ensured my legs were fully ready for this and as other competitors slowed and walked I continued to run and gain places. We went up and up and then the first hands and feet scramble where nobody was running, but everyone was breathing heavy. As we reached the peak of the hill it started snowing and we started the long descent to the village. As we dropped we could see the headtorches of the earlier waves on the hill on the other side of the village so we knew where we were going, (And it looked steep).

We all set a good pace down the hill and as we got near the bottom it became very undulating and some of the runners around me were tripping and slipping among the trees and mud, I checked they were ok and once I knew they were I carried on.

As I reached the village we were greeted by people cheering and waving and handing out sweets and water and then we saw it the dreaded Scree climb. We followed a track along the bottom of the hill and then turned left and up we went, and up and up, legs were burning and breathing was becoming heavy but I kept moving forward hands and feet, one in front of the other, most stopped but I kept going knowing I had it in my legs I slipped, I climbed again, I slipped again and kept on pushing until I reached the summit.

The decline was even harder as even with the head torch it was hard to see and after all of the rain the ground was very slippery, I slowed down, aware that this is race 1 and I don’t need an injury at this early stage,

We went back through the village and then into the final Obstacle (The River Tunnel). As I dropped into the river it went up to chest height, some of the smaller runners had to swim through, as we came out of the other side it took our legs a little while to get going as the water was 0 degrees.

It was then a race home for tea and medals and challenge 1 The Mighty Deerstalker had been tamed.

So what are the statistics:

9.5 Miles of Very Hilly Trails completed in the dark

And now onto the next Challenge for the MLT, Ultra Tour of Arran 60 Miles across the Island over 2 Days. Wish me Luck I’m Gonna Need It!

It can be seen how much of an inspiration Mr Leak is with the amount of training and high levels of preparedness he exhibits, we wish him all the best for the next race and encourage you to donate if you can!